Lately I got into keyboard and decided to design my own keyboard. But, because I don't have 3d printer, I decided to design it as a plat based frame or something along that line to simplify the process in case something goes wrong. Not only that, I wrote a simple design directly using OpenSCAD. Not going to lie, it was a dumpster fire. And let me be honest here, I don't really like writing in that kind of language.

First step, I look for an OpenSCAD library and found one. Second, studied it a bit. And then, wrote some modifications.

There are a few things that I've added. For example, I've added center option for rectangle. Oh, perhaps I only added that one thing. Well, whatever.

So, let's start writing that code. (p.s. i hate pressing shift when writing)

Of course I started it by defining some contants like:

And then, I wrote a function for a key area. That is a square with side length keylength with a square holed with switchlength as its side length.

Like what I've said before, I modified openscad library so it can know whether we want the square to be centered or not.

And if we evaluate that piece of code and render it, it will show this following snippet (prettified)

The next part is, of course, writing the column by using singleholedkey as the building block.

And when we render that function with 4 as keys, we will get something like this.

Of course OpenSCAD suppports for loop, but I want to be a galaxy-brain by using a map to translate those singleholedkey into column and join them together. Although it seems manual if you compare it with for construct, it's ok, I guess. If you're still confused, look at this illustration:

There should be an area to ease the bending process by creating a something like a neck for the column.

Looks weird, right? Well, yeah it does. Now, how did I write that? Something like the following:

First, I created a weird pentagon

Which when I replace width, height, and depth with 5, 5, 2.5, respectively, will generate something like the following

That mirror (1, 0) makes the next shape to mirror x axis and the rendered result will look like this, if using the same parameter.

Followed by mirroring the above hexagon by y axis, I achieved the neck / bending area.

Which when it gets rendered, after feeding it 10, 10, and 2.5 as its parameters, would show something like the folllowing snippet:

And there you go... A neck area or bending area or whatever you want to call it.

The next part for the column part is the part where somebody put a hole on it. I can't give you an ascii art about it, so here's the image. 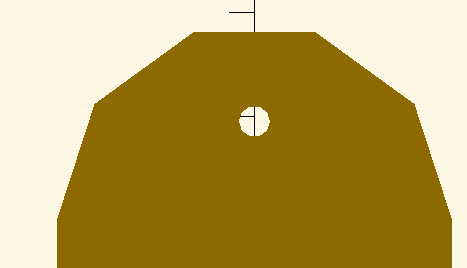 How did I do that, you ask? First, create a circle with a certain radiuus. Then, remove the half of it, preferably from the lower region. Finally, create a hole for the screw itself. For the reason why I did choose for circle, because I want it to be able to rotate it from z axis. Now, let me show you something unsightly.

If you read the manual page of OpenSCAD, you will see that difference takes a list of shape. But, as I've said before, as a galaxy brain, I used foldl like a PhD student in Category Theory just to get the differences from those three shapes. And no, I won't show you how the generated scad function.

The next part is combining those three parts together, if you want to curse me.

As an observer of American Internet Culture, I will say, "there's a lot to unpack here" like a true UCLA academian.

When I provide 3 and 10 as that function parameters and render it, it will spit something that when I open it in openscad, will look like this pic:

P.S: I rotated it 90 degrees because I don't like tall images.

As I've defined above, there's a value named materialthickness. Since the frame should account for the thickness of the switch plate, I'm going to add that value twice so it will be fit. Pretty sure you're confused, right? Just look at the following ascii thing.

Notice the length difference between the two. Basically I intend to put the switch into the frame. As for the reason? There's none. I just want to make my life a bit complicated.

Now, let me write that thing.

Again, there are a lot to unpack here. sips soylent But calm down, there are a few things that is not that different with the previous explanation.

Now, time to render this thing and you will see thing thing.

As you can see, I've completed the body parts. Now I have to create something to make them together. No, marriage is not a solution. Yes, just create some planks and sandwich the body with them. What a magnificent show of ingenuity!

(Un)Fortunately, there is not much to unpack here. Why did I put that columncount there? Of course, comrade, it is to make it "parametric", though I don't even care what that does actually mean. And why is planklength longer than columncount? Because some of you have wide fingers so I gave it some margins in case you want to give a bit space between the column. About those values which are the results from hull functions, it's simply the plank itself and where the screwlines from the body and the planck intersect.

Here's the picture when I put 6 as the columncount.

Apparently, I have the main body of the keyboard, now. The next part is writing the thumb cluster.

Talk about thumb cluster, I can't imagine myself using Kinesis, Maltron, Ergodox's style of thumbcluster. For a couple of month of Dactyl Manuform usage, I can tell that at most I can use 4 switches for the thumb cluster. It's not the layout's fault. It's my and my fucked up right thumb's fault. The thumbcluster that looks usable for my right thumb is Redox's.

Now, let me show you another an ingenious thing.

In short, I wrote a value of a column with 2.5 unit which consisted of a 1.5u and 1u. If I think it a bit carefully, openscad is pretty nice.

Because I already have the building block, I can write the cluster.

Of course, I started by writing the column. You know, the plate. Though it basically just an union of two twoandhalfholedkey.

Though this one is a bit worrying, it's still simple and not that dissimilar compared to screwarea. The differences are:

I mean, look at this thing.

When the screwline is longer than the distance of that two parallel screwlines, I am able to rotate them a bit drastic. Well, whatever. Pretty sure I've gotten my point across.

Now, this one is simple too. Whatever I've used to explain switchcolumnplate can also be used to explain this part. Anyway, here's a rendered result of that function if I use 10 as bendinglength parameter.

As you can see, the thumbcluster doesn't differ much compared to Redox's. This leads to the need of something that holds it.

Index
Resume
Contact
About
Feed
This material is shared under the CC-BY License.